Home / Resources / Why Los Angeles Freeways are so Congested

Why Los Angeles Freeways are so Congested

Want to know how much your payments will be? Use our title loan calculator to find out.

Call us anytime seven days a week for instant pre-approvals! 2 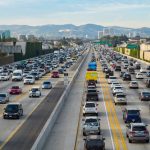 Not only does Los Angeles have the most clogged streets in the United States, but it actually leads the entire world when it comes to urban congestion. Los Angeles residents spend an average of 104 hours per year stuck in traffic, which amounts to nearly thirteen percent of their total drive time. The second most congested city is Moscow, followed by New York City in third place.

Why does Los Angeles suffer from such terrible traffic problems? There are a number of reasons ranging from the layout of the city to the many benefits Los Angeles residents experience from owning their own transportation. Here is a deeper look at why Los Angeles experiences such high freeway congestion.

The Benefits of Owning a Vehicle

There’s no question that people love their vehicles and that there are many benefits to owning one. Along with being able to go where you want when you want, buying a car also helps your credit score, and owning a car may qualify you for a car title loan in case you are in emergency need of cash. Owning reliable transportation is also the key to having access to healthcare, having more childcare options, and being able to obtain employment further away from the neighborhood in which one lives.  Owning a car is also a status symbol, and many people strive to buy their own vehicle as a sign of success.

Of course, there are drawbacks to owning a vehicle as well. Not only is there the cost involved in the form of car payments, insurance, and taxes, but those with vehicles must also think about parking options and security, a consideration that is even more important if the individual lives or works in areas of the city that are high in crime. However, unlike other large cities like New York, where those who own their own cars are in the minority, Los Angeles is a city where residents believe the benefits of owning a car outweighs the drawbacks.

Though it’s annoying for those stuck in it, traffic congestion is actually the sign of a rich and prosperous economy. The unemployment rate is one of the lowest it’s been in years in Los Angeles and, with the improving economy, comes more people with jobs they need to drive to. In addition, more jobs mean more money, which allows those who may have previously had to rely on public transportation to afford vehicles of their own. Though this is a good thing for the residents of Los Angeles and for the country’s economy in general, it’s not such a great thing for traffic. With tens of thousands more vehicles on the streets, especially during typical drive times, congestion quickly follows.

The low cost of driving in Los Angeles in recent years has also added to the appeal of owning and driving one’s own vehicle. In addition to many options for loans for those who don’t have great credit, the following also adds to the affordability of driving in the city:

Affordable gas  Gas prices have stabilized over the past few years, making driving a more affordable option that it was during the gas price spikes in 2008 and 2012.

Ample parking  Parking is relatively easy to find in L.A., especially in suburban areas. Unlike many large cities that feature tough-to-find parking spots and expensive garages and lots, Los Angeles has many low-cost or free parking options. This makes it much more attractive to drive to and from work as well as drive to shopping areas, to visit family and friends, or to run errands.

Lack of toll roads  Los Angeles has few toll roads, which makes it much more affordable and convenient to drive than in those cities that have numerous roads of this type.

Los Angeles is an incredibly spread-out city, covering over 500 square miles. This is over 200 square miles more than New York City and over 250 more square miles than Chicago. What does that mean for those who want to get around? It means that it costs more to take cabs or public transportation and that it’s not as convenient to take a cab or bus to one area of town and walk to the places you need to go. In most cases, driving is the most convenient way to navigate this sprawling metropolis.

In 2015, a law was passed that legalized driver’s licenses for undocumented immigrants in California. This enabled tens of thousands of those who had previously relied on public transportation or carpooling to begin driving their own vehicles, adding to the overall number of cars on L.A. streets.

Public transportation is simply not as convenient or reliable in L.A. as it is in many other large cities. Buses have difficulty staying on time and many do not feel safe on Los Angeles buses and trains due to gangs, the homeless population, and poor security. In addition, many areas of the city are disconnected from each other, causing those who take public transportation to transfer from buses to trains a number of times to get to their destination. Many residents already spend an hour or more commuting when they drive their own vehicles. If they were to take public transportation, that number could double or even triple.

Though the city is constantly working on improvements to L.A.’s public transportation system, it seems they cannot keep up with the city’s growth in both square footage and number of residents.

Los Angeles residents spend an average of 45% extra travel time than those who live in other large cities. Due to the layout of the city, the low cost of driving, and the unreliability of the public transportation system, it’s unlikely that this problem is going to be solved any time soon. However, many L.A. residents would rather spend the extra time on the roads if it means they get all the benefits of owning and driving their own vehicles.